Think You Have Mad Farmville Skills? Put Them To The Test at MyFarm

Posted by Staff Editor • May 11, 2011
A new site lets you take your Farmville experience out into the real world. Do you think you have what it takes? 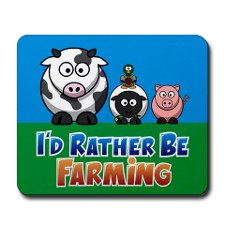 When I think of how many hours I've spent toiling in the hot virtual sun tending to my Farmville farm, I start to wonder if all of this virtual work might be useful experience for making a go of farming in the real world. After all, I have turned my little start up farm into a virtual money making machine over the course of a year or two.
Don't get me wrong, I am not ready to stop posting blogs in order to look for a job running a farm. Now that I think about it, all of that fresh air and sunshine really isn't my thing.
But, for the braver souls, there is a new website, called MyFarm, that promises all of the excitement of actual farming without having to deal with the dirt, heat or bugs.
The creators of the site are hoping that at least some of the estimated 62 million active Farmville players, will be interested in trying out something a little more real, like the chance to manage the daily activities on an actual farm. That is, of course, providing they don't have to leave the comforts of their living rooms.
If you have dreamed of putting your mad, virtual farming skills to the test, all you have to do is sign up with MyFarm and pay the one time enrollment fee of $48. Which, considering that the average Farmville player spends about $20 a month buying virtual stuff for their farms, it doesn't sound so outrageous.
The real world farm that is being used for the MyFarm experience is a 2,500 acre farm in Cambridgeshire, U.K. The farm is part of the U.K.'s National Trust and is located on the Wimpole Estate.
The “farmers” will have the chance to collaboratively decide on everything that happens on the actual real world farm. They will be able to vote on exciting things like which crops to grow and which livestock they should have the most of. Just to keep things running smoothly however, the site will employ a full time, on-site farm manager.
The MyFarm farmers will have almost total control over the success, or failure, of this real world farm. To help the players, many of whom may not have ever even visited a real farm, the website offers many resources for learning the basics of farm management.
I can imagine that one of the challenges of educating these virtual farmers would be managing the players expectations. Because, on a real farm, crops take a long time to grow. In fact, even fast growing crops like strawberries take a little longer than the 4 hours that players are accustomed to on Farmville..
Also, there is always the issue of treating livestock humanely. It is a fact that Farmville players don't actually care about the health and safety of their livestock. In fact, it's common to see the animals hanging around the farm, dressed up in silly costumes. Also, the animals don't get hurt, sick and don't die.
The other issue, and this one I think MyFarm will have trouble overcoming is this: When you make changes on an actual farm, it can take a really long time to see any real impact. Real farms aren't nearly as entertaining as the virtual ones.
It remains to be seen if this experiment will be a success, but either way, I think it's really exciting. If it succeeds, it might become the model for new games and websites that merge online activities with real world results. For example, a virtual doctor's office or bakery might be a lot of fun. And, when that happens, remember that you heard it here first.
Are you a virtual farmer? What do you think about this new website/game? Are there any other activities you think would be interesting to mix online play with real world results? Let me know in the comments.
By Melissa Kennedy- Melissa is a 9 year blog veteran and a freelance writer for CommunicationsJobBlog. Along with helping others find the job of their dreams, she enjoys computer geekery, raising a teenager, supporting her local library, writing about herself in the third person and working on her next novel.