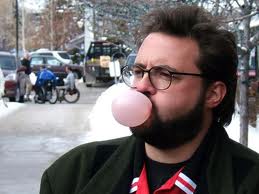 This year hasn't been particularly kind to director Kevin Smith. First, there was the criticism and box office failures of his movie “CopOut”. Then, he made headlines after having been kicked off of a Southwest Airlines flight because he was too fat. He was so embarrassed and humiliated after all of the media coverage discussing the airlines and his weight issues, he vowed never to fly again.
The problem with never flying is that Smith makes quite a bit of money off of public speaking engagements. At the time of this article publication, he has at least 3 DVDs just of his speaking engagements and question/ answer sessions. Whether you love him or hate him, people love to hear him talk and are willing to pay for it. So, if he won't fly to talk to people, he had to find a way to reach his audience without having to get on an airplane.
After spending the summer traveling to his speaking engagements on a bus, he discovered podcasting. He decided to turn his podcasting into a live theater experience. After making the decisions, his friend found a 50 seat theater in Hollywood. The theater has been dubbed SModcastle, and it is the home of Smith's SModcast podcasts.
Although other podcasting visionaries have experimented with live shows, the SModcastle is the first open-to-the- public podcasting headquarters. It host six weekly podcasts and have had four of them consitantly rank in the top five category on iTunes.
The theater itself is sold out every night and charges $10-25 a head, depending on the show. In addition, the podcasts have sponsors and Smith charges, on average, $2000 a spot, with each podcast having two ads each. In addition to the income from ticket sales and advertising, Kevin Smith also performs weddings at his SModcast headquarters. Fans pay around $5,000 for the privilege of being married by Kevin Smith at his headquarters.
The amazing thing about all of this, is that he is accomplishing this without having to advertise his shows at all. In fact, he uses Twitter to let his fans know the show times, and they do the rest. It is a new business model and one that may set the stage for other speakers and podcasters in the future.
And to think this success all came from getting kicked off an airplane. It just goes to show that making lemonade out of lemons can not only be character building but profitable as well.
Are you looking for a job in Communications? Be sure to visit CommunitcationsJobs.net.
By Melissa Kennedy- Melissa is a 9 year blog veteran and a freelance writer, along with helping others find the job of their dreams, she enjoys computer geekery, raising a teenager, supporting her local library, writing about herself in the third person and working on her next novel.