It's not a Toy, It's a Cell Phone Tower 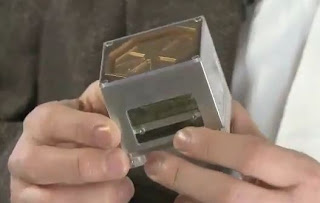 Imagine a cell phone tower that fits in the palm of your hand. Although it could be mistaken for an elaborate toy resembling an updated Rubik’s Cube, the lightRadio by Alcatel-Lucent is a powerful tool that will change the communications landscape, literally. Globally, people are becoming more connected. As the use of cell phones, smart phones, tablets and other wireless devices flood into the hands of the public, the demand for mobile data usage is escalating rapidly. 2G, 3G, and 4G networks all require separate antennas sending signal simultaneously which can create confusion in the crossovers. Carriers are trying to curb usage in order to keep their costs down. The worldwide wireless industry cost $210 billion dollars to maintain and $50 billion to upgrade annually. Capping usage, adding overwhelming overage fees, and increasing the prices on smart technology plans have still not deterred the legions of linked customers insisting on unlimited internet and downloads on their devices. Alcatel-Lucent project mobile usage will grow 30 times in the next 5 years and in 10 years it will be 500 times more. It’s not hard to picture that future when the Asus Eee Slate by Windows 7 is clearly targeting parents in an effort to connect kids to wireless technology. We are in the wireless generation as teens today collectively only remember cords on telephones from reruns of 80’s sitcoms. It seemed the only option was for cell phone companies to build more towers that used more power and cost more money to carriers and consumer alike. Alcatel-Lucent took on the challenge to complement the existing structure with a low-cost, energy-effective, space-saving, sustainable alternative and succeeded with the lightRadio. By combining miniaturization and cloud technology, the smart device contains all the components of the larger antenna packed neatly in a little box. It can be stacked like Legos almost anywhere, even on top of the bus stop. Clusters of cubes will be common in more populous places with each 1.5-Watt lightRadio box powering an approximate two-block radius. Units will also be attached to existing antennas to provide complete coverage on the roads less traveled. Benefits to the box include:

Several of the big carrier companies are already considering signing on to the lightRadio. The lightRadio trials are set begin in September 2011. The company anticipates producing them in volume by 2012. A Sprint spokeswoman said, "Sprint is talking to Alcatel Lucent about this technology and we will be working with them to test and evaluate it, "We have been aggressive in smaller factor cell sites to help us support the growth in data traffic." The technological advances offered in the cube could slash wireless companies’ costs in half, a savings that could be passed to the customer. Users would no longer be intimidated by overages and data plans could be inexpensive and unlimited. If you are interested in a better career in communications, visit CommunicationsJobs.net.

By Heather Fairchild - Heather is a multimedia developer with experience in web, film, photography and animation as well as traditional fine arts like painting and sculpting. In addition to writing for CommunicationsJobsBlog.net, she is co-founder of design and promotion company, Creative Kazoo with fellow Nexxt blogger, Staci Dennis. Heather’s spare time consists of making puppets, teaching Sunday School, building Legos and doing science experiments with her children.