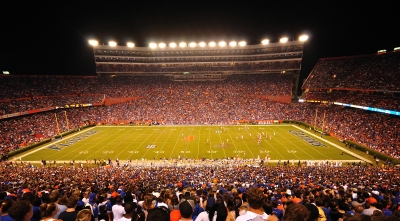 The commercials that air during the Super Bowl are in many ways as popular as the event itself. Advertisers who run Super Bowl ad spots during the timeouts and other breaks in the action can drum up big business for their companies due to the potential for millions of viewers to see a single ad. Many large companies focus very heavily on Super Bowl ad placement, with hundreds of thousands of dollars or more going into each one to promote maximum return and retention. The keys to a solid ad campaign include creating memorable ads that will be discussed at water coolers or in living rooms for weeks after the event as well as showcasing goods, services, or even website names in a new and interesting fashion.

Super Bowl commercials are often used by advertising professionals to help sell big-ticket items. Cars feature prominently in ads during the event, and at least two major companies are attempting to redefine their images with 2014 Super Bowl ad spots. Jaguar's new ad will position itself as the bad boy, looking to edge out American luxury cars and gain a stronger foothold in the U.S. market. Given the recent trend in television and entertainment towards sympathy with bad boys and criminals, this may well pay out for the British multinational company. Korea's Kia brand is looking to make an impression on the same market by playing on 1990s nostalgia and asking viewers to reconsider their thoughts on what makes a luxury car. These Super Bowl commercials show that companies are paying close attention to what is hot in today's media and tailoring their work to match, delivering a great lesson for other advertisers worldwide.

Many companies have made themselves part of the spectacle surrounding their Super Bowl ad spots. GoDaddy, the popular Internet hosting service and website registrar, and Intuit, creator of QuickBooks and TurboTax software, purchase ad space year after year. These investments help ensure that their names are nearly synonymous with their industries in the United States. Many people look specifically for GoDaddy ads during the event to see which hot female celebrity is promoting or endorsing the product this year and how she is doing it. This year, GoDaddy may well turn that expectation on its ear with a Super Bowl ad  focused on what the company does instead of scantily clad celebrities. This is a great lesson for advertisers: avoiding a repetitious rut can get people talking again—surprise sells.

Major companies continue jumping on the Super Bowl bandwagon. Jaguar, Chobani, and Squarespace, a design-centric platform for websites, are all debuting their first ever Super Bowl ads this year. This shows that even though many companies have established themselves as players in the television event ad space, others may still join the fray. Advertisers working in today's market must keep an open mind about available options at all times.

The lessons provided by the Super Bowl ad selection this year can help advertising agencies grow. Delivering a surprise that may reverse preconceived notions and getting your message across to as many people as possible can help ensure success in today's competitive advertising field.