Beware of These 8 Lies From the Interviewer 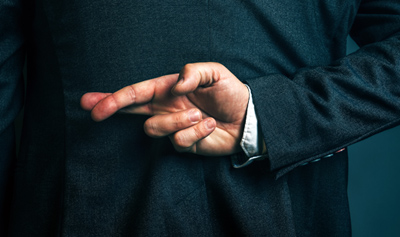 During the interview, the words the interviewer uses can be very telling. Often, interviewers tell job candidates things that aren't entirely true. It's important that you recognize these statements for what they are, so you don't get a false sense of hope. Take these seven phrases with the proverbial grain of salt.

1. You Have Our Ideal Qualifications

If you've made it to the interview stage, it's likely because you fit many or all of the qualifications the employer is seeking. The same goes for every other candidate interviewing for the position, so don't pat yourself on the back yet just because the interviewer confirms your qualifications.

2. We Provide Salary Based on Work Experience

Interviewers love to say this to avoid talking about salary during the interview, but the statement isn't entirely true. While your past work experience undoubtedly makes a difference, most employers already know what they plan to offer for an open position. At the very least, they have a range. It's your responsibility to research thoroughly prior to the interview so that you have a good idea of where to start with negotiations.

3. We Offer a Great Benefits Package

"Great" is a highly subjective word; one person's definition of a great benefits package may differ significantly from another's, so get some details if you can. Ask about the benefits that are of most importance to you, such as a retirement plan, medical coverage or corporate discounts.

4. This Would Be Your Workspace

Interviewers often include a tour of the company building as a standard part of the interview process. Don't get carried away when the interviewer says something like, "This will be your desk," because you can bet that each and every candidate after you is hearing those same words.

5. You May Be Right for Another Position

The interviewer may be looking for a gentle way to let you down if you're not the right fit for the position you're interviewing for. If there actually is another position or project you might be considered for, it probably won't live up to the same expectations you had for the first job.

6. You're Great But We Still Need to Interview More People

If they were truly impressed with you, there'd be no need to interview more candidates after you. The hiring process takes time, energy and money, and most employers want it over with as quickly as possible.

This is often a standard phrase said at the end of many an interview. It doesn't always necessarily mean the interviewer is going to get back to you; rather, it is a polite way to end the interview while giving you some sliver of hope for a callback.

8. We Should Have a Decision Next Week

Don't assume you will receive a callback after the interview. It is your job to follow up with the hiring manager to get a timeline on next steps.

Many interviewers use vague wording and half-truths to speed the hiring process along. It's important to separate the fluff from the truth; after the interview, be sure to follow up with the hiring manager with a thank-you note and a call to action. If you don't hear back within a reasonable amount of time, move on.

Photo courtesy of bm_adverts at Flickr.com