6 Marketing Tips You Can Learn From Harry Potter (Part Two)

Posted by Staff Editor • Apr 18, 2011
Let Harry Potter teach you some marketing tips. (Part Two)
If you already read Part 1, welcome back! If you're just joining us, this is Part 2 of this series. 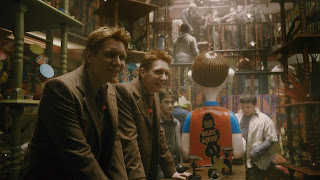 At the beginning of the book Harry Potter and the Half Blood Prince, we find that the wizarding world is in turmoil and going through a terrible economic time. Stores are boarded up, shopkeepers are either getting killed or are finding it difficult to get customers in their doors. Even places like The Leaky Cauldron, a tavern that has a seedy nightlife, is finding it hard to get even three people to spend their galleons on butter beer.
That being said, there is at least one business that is still bringing in the customers in Diagon Alley. Weasley's Wizarding Wheezes, a joke shop that sells love potions, extendable ears and other gag type spells is thriving. What is the secret to their success? It certainly isn't because the owners are well educated in business and sales, and it isn't because they sell things that people can't live without. Fred and George Weasley were lucky enough to find an Angel Investor and are completely committed to their success.
Here are the last 3 of the 7 Marketing Tips you can learn from Harry Potter:
Who knows what the future will hold for this simple Joke Shop, but in a short time they have experienced a great deal of success. They landed a government contract for the Shield helmets and expanded to shield cloaks and gloves but still managed to keep their focus on mischief making and creating applications of magic. Their careful planning and strategic business plan have given them the keys to marketing success.
Sources:
Huffington Post
HP Lexicon

What do you think about these tips? I would love to hear your thoughts in the comments.

If you are looking for a job in Sales, visit SalesHeads for the best Sales job listings.

By Melissa Kennedy- Melissa is a 9 year blog veteran and a freelance writer for SalesHeadsBlog, along with helping others find the job of their dreams, she enjoys computer geekery, raising a teenager, supporting her local library, writing about herself in the third person and working on her next novel.